- In patients with confirmed Alzheimer's disease biomarker profile (amyloid and tau positivity) AADvac1 shows a strong efficacy signal, demonstrated by significant slowing of clinical and functional decline as measured by CDR-SB and ADCS-MCI-ADL 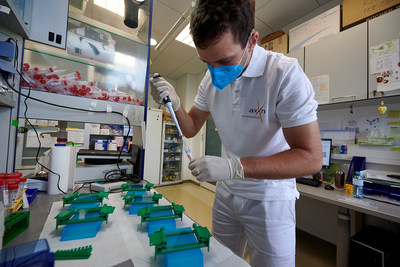 The article titled "ADAMANT: a placebo-controlled randomized phase 2 study of AADvac1, an active immunotherapy against pathological tau in Alzheimer's disease" was featured in June issue of this renowned journal.

The Phase II clinical study ADAMANT was a 24-month randomised, placebo-controlled, parallel group, double-blinded, multi-centre trial to assess the safety and efficacy of AADvac1 in patients with mild Alzheimer's disease.

The primary objective was safety, with secondary objectives of evaluating immunogenicity, efficacy on clinical outcomes and key biomarkers of neurodegeneration. 196 patients across eight European countries were recruited into the study.

ADAMANT successfully met its primary objective, with AADvac1 shown to be safe and well tolerated. The exceptional tau antibody response demonstrated by the vaccine is especially important when treating the elderly.

The most pronounced effects of the vaccine on clinical and functional outcomes were observed in the subgroup of patients with confirmed Alzheimer's disease biomarker profile. In this subgroup, AADvac1 in comparison to placebo significantly slowed the clinical decline by 27% as measured by CDR-SB (p value=0.048) and functional decline by 30% as measured by ADCS-MCI-ADL (p value=0.039). The efficacy signal was mirrored by strong reduction of NfL blood levels by 62% (p value=0.010) as compared to placebo. This subgroup of patients (n=109) was identified in collaboration with University of California San Francisco by using the MRI multimodal classifier.

The therapeutic effect of the AADvac1 treatment on clinical measures and fluid biomarkers supports its potential use to treat and possibly prevent tau pathology, the driving force behind the clinical decline of Alzheimer's patients.

Michal Fresser, CEO of Axon Neuroscience, commented: "Our Phase II trial successfully demonstrated the strengths of our lead asset AADvac1, a tau vaccine on track to prevent and treat Alzheimer's disease. After an extensive peer-review process, we are pleased to publish the results in the scientific journal Nature Aging. The results confirm the disease-modifying effect of AADvac1, and support Axon's progress toward a pivotal stage of clinical development. In view of the recent approval of amyloid-based therapy, our strong NfL endpoint results could serve as a surrogate in our forthcoming clinical development to achieve accelerated approval."

NfL is a sensitive and dynamic biomarker of neurodegeneration. NfL is associated and correlates with cognitive, biochemical and imaging hallmarks of Alzheimer's disease.

MRI multimodal classifier combines the structural MRI, demography and clinical modalities, which allows the imputation of the amyloid and tau biomarker status.

Axon is developing AADvac1 as a vaccine with the potential to halt the progression of tau pathology in Alzheimer's disease. The clinical benefit is expected to include symptomatic relief and the potential to prevent disease onset. AADvac1 is currently the most clinically-advanced tau therapy in development.

It differs from other tau-based therapeutic candidates by targeting both the formation of pathological tau proteins (truncated and oligomerized forms) and the spread of those species already formed. The rest of the industry has been focused primarily on preventing the spread of already-formed pathological tau species. AADvac1-induced antibodies preferentially discriminate between normal and pathological tau, ensuring only pathological tau are targeted, leaving healthy tau intact. As a result, Axon's AADvac1 treatment is expected to be more effective and safer.

About Tau Pathology in Alzheimer's disease

Pathological tau protein is the cause of neurofibrillary tangles (NFT). NFTs were confirmed to be linked to neuronal loss and brain atrophy. The amount and distribution of NFTs throughout the brain correlates with Alzheimer's disease progression and clinical symptoms. This was discovered by Prof. Heiko Braak in 1991, and further confirmed in 2015 by the Mayo Clinic's study on over 3,000 brains. CSF tau biomarkers are considered to be the direct markers of tau pathology, and additionally recent studies have further confirmed that the NfL biomarker in blood reflects the NFT burden in the brain.

Norbert Zilka, CSO of Axon said: "The recent approval of an amyloid-based therapy was encouraging for the whole Alzheimer's industry. Unlike amyloid, which influences speed of Alzheimer's progression, there is strong evidence that tau pathology relates to the underlying cause of the disease. Our vaccine aims to halt the formation and spread of tau pathology, which has ultimately the potential to show a higher benefit for Alzheimer's disease patients."

Axon Neuroscience was founded in 1999 by immunologist Professor Michal Novak. In 1988 Professor Novak discovered tau protein as the major component of NFTs in Alzheimer's disease while working in Laboratory of Molecular Biology, MRC in Cambridge, UK. Axon now has the single biggest team in the world dedicated exclusively to tau research, with over 60 scientists and 15 senior scientists. Over the last two decades, Axon has published a large body of evidence demonstrating that pathological tau is the main driver of Alzheimer's disease. About Biotechgate
The French Biotech Database is a product of Venture Valuation and part of the global Life Sciences lead generation and intelligence platform Biotechgate. Our mission is to provide up-to-date company and business information of the Biotech, Pharma and Medtech sectors to professionals everywhere, in order to support them in identifying the most appropriate business partners, customers and suppliers.